I created an educational curriculum or program that is called the Color Vibration® Color Balancing System.  Based on the system I developed a product line to support this curriculum.  There are 8 categories:  red, orange, yellow, green, blue, indigo and total vibration. An example let’s say someone is 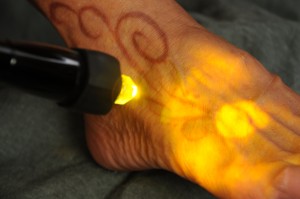 low on energy then we would want to introduce the vibration of Red into their lives that can be done through essential oils that vibrate to the frequency of Red and of course color light therapy……..so you could give the client a reflexology treatment applying an oil that stimulates the adrenals and then add the Red light to that areaLet’s say someone has sinus issues you could apply an oil that vibrates to yellow to help drain the sinus and then apply the yellow oil you can do this through reflexology or you can apply the yellow light to the sinus area around the noseMy educational program will allow someone to become a certified Chromatologist ®I believe that if you address the emotional body you can prevent disease on the physical body………my color selection form will give the necessary information to the chromatologist (or health care professional including medical docs) to evaluate the clients gifts and blocks therefore assisting them in their healing.  Through this system you can tell if someone is pre-cancerous, suicidal, depressed just to name a few.Chromatherapy or Chromotherapy is also called color therapy, and colorology it is considered a complementary medicine method.  A trained Chromotherapists will be able to use light in the form of color to balance “energy” in the area a person’s body is lacking, whether it be on a physical, emotional, spiritual or mental level.  Color Therapy is no related to light therapy which is a scientifically proven form of medical treatment for seasonal affective disorder and a small number of other conditions and photobiology, the scientific study of the effects of light on living organisms. 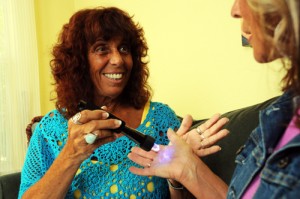 My light kits are based on Dinshah……….I first saw his work about 20 years ago when a medical Doctor (from the Aleutian Islands) sent a message to me (I was in Juno Alaska) he invited me to his office out in the bush……..when I entered the door their were patients sitting with small flash lights coming out of their nose, ears etc very interesting…………Dinshah created a machine that you would lay in and when applying the color Blue it would shrink growths including cancer growths worked much like a slide machine…his sons sell some of his work however they do not have the passion or integrity Dinshah had.  Dinshah was closed down when the AMA was formed. 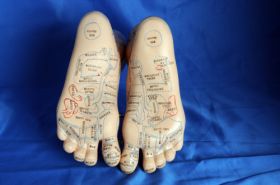 Reflexology is also known as zone therapy it still remains a mystery as to have it originated.  Dr Fitzgerald in his book Zone Therapy states that it originated from China some 5,000 years ago as a form of pressure point treatment.  Dr Fitzgerald was an ear, nose and throat specialist and should be credited for his part in reviving reflexology.  Another thought is that it began in Egypt.  There is evidence from and Egyptian tomb drawing dating back to 230 BC.  This drawing shows four people, one person is being treated with foot massage and a second person with a hand massage.  Now others credit its birth to the Incas.  There were people of a very ancient Peruvian civilization, possibly reaching back to 1200 BC.  It is speculated that they passed their knowledge of zone therapy down to the North American Indians who up to this present time are still using this form of treatment.Reflexology states that the body is divided into ten vertical energy zones, inside those zones are the organs, muscles and skeletal structure of the physical body, all are reflected on the soles of the feet and palms of the hands.Color as a therapy reaches far back in history, but unlike reflexology, it is still in its infancy of rediscovery.  There is speculation that color therapy was used by the Atlanteans.  It is believed that they built temples with ceilings that were domed and constructed from interlocking crystals that dissipated light into the color spectrum.  Around the circumference of these temples were healing rooms, each reflecting one of the colors that dissipated from the crystals.

At the beginning of the nineteenth century, with the discovery of new drugs and advances in surgical procedure, color therapy started to be replaed by allopathic medicine.  What is really interesting is that some of the early pioneers of allopathic medicine continues to use color in their treatments.  One pioneer was Paracelsus (1493-1541).  Paracelsus developed considerable interest in alchemy, astrology and occult sciences.  His love of alchemy and his application of this in his treatments earned him the title “father of pharmacology”.  Another pioneer was Hippocrates (460-370 BC), also versed in alchemy and known as “father of medicine”.  He was famous for his “Hippocratic Oath” 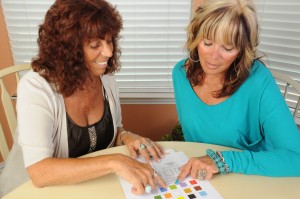 There is now a growing awareness of the detrimental effects of allopathic drugs, the percentage of people returning to complementary therapies has started to increase.  Unlike allopathic treatment, complementary therapies aim to deal with the cause and not the manifested system.  This is often a foreign concept with some people and they find it difficult to work with.  However unless the cause is found and eradicated, it will continue to manifest as a physical system.  One way of helping the person to locate the cause is through counseling and color therapy.

Humans are beings of light, surrounded by colors which constitute visible light.  This also establishes the electromagnetic field or aura surround us.  The aura is filled with constantly changing colors, determined by our state of health, physically, emotionally and mentally.  How true the sayings:  “green with envy”, “red with rage”

In this auric field there are seven major and twenty one minor chakras or energy centers.  This also contains numerous acupuncture points.  The layer closest to the physical body is known as the etheric sheath and is the blueprint for the physical body. It contains the very fine energy channels through which energy flows. This network of infinitely establish the counterpart of the entire nervous system.

The etheric sheath contains seven major and twenty one minor chakras or energy centers. It also contains numerous acupuncture points.  These force centers can be found in each of the layers constituting the aura, but their primary importance is at the etheric level. They are both the transformers and the transmitters of energy for each of the layers and work with the physical endocrine system. Disease starts in the aura as accumulated energy. If this is not dispersed, it will eventually manifest as a physical disease.

Because the feet and the hands present a mirror image of the physical body, they reflect the auric field around themselves. The chakras can also be located along the spinal reflex on both feet and hands.  These are important points for treatment, especially for hormonal imbalances.

Although the chakras work mainly with the endocrine glands, they also have an effect on organs, muscles and bones which lie in their pathway. Each color contains within itself its own spectrum of color. Therefore the parts of the body related to a specific chakra will vibrate to a frequency contained within the spectrum of color of that chakra.

When working with the vibrational frequencies of color in therapy, it is important to administer the treatment color followed by its complementary color. By treating with color and complementary color, you work with polarity. Polarity teaches that complementary energies have to be in balance to create harmony. 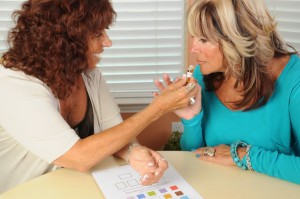 When treating a person with the combination of these two therapies (color and reflexology), a complete reflexology treatment is initially carried out. A reflexology treatment is diagnostic, thereby enabling a practitioner to locate where problems or potential problems lie. Having completed this, the general colors with their complementary colors are applied to the areas where an abnormality has been found but it has produced no noticeable symptoms in the physical body. The reason for this can be two reasons. It could be related to an accumulation of energy in the etheric layer of the aura, or it could indicate that a particular part of the body is under strain through trying to keep the whole in balance. If, through disease, the vibrational frequencies of the etheric body changes, the change will affect the cellular structure of the physical body. This then affects the force field of the related organ or organs. If the force field of one or more organs is altered, then the body will try to bring itself back into homeostasis. This process can put strain on healthy organs within the physical structure which shows itself as pain on the related reflexes on the feet or hands. Administering the general color, with its complementary color, to the related reflex, will help to re-balance its altered function.

The treatment colors, with their complementary colors are then applied to the zones on the feet which relate to the part of the body which has manifested problems.  Color can be applied to the zones of the feet in two ways. First, if the practitioner is sensitive to color, they can visualise it being channelled through their hands (such as healing touch praticitoiner) or you can use a color therapy light preferably with a crystal attached.  Depending upon the clients degree of sensitivity, some are able to feel the color pulsating through their body.

Combining color with reflexology is still in its infancy, and I know that what we are experiencing is just the tip of the iceberg.  If we are beings of light, and of this I have no doubt, surely treating with the vibrational energies of light must be therapeutic. I personally believe that vibrational medicine will be the medicine of the future and this will consist of color.

Do NOT follow this link or you will be banned from the site!